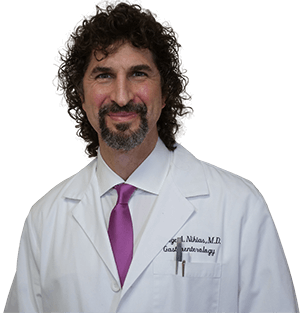 George Nikias is a graduate of New York Medical College. He completed a residency in Internal Medicine at North Shore University Hospital and Memorial Sloan-Kettering Cancer Center followed by a fellowship in Hepatology at the Mayo Clinic in Rochester Minnesota and a fellowship in Gastroenterology at Memorial Sloan-Kettering Cancer Center. Dr. Nikias is a member of Hackensack Gastroenterology Associates.

Dr. Nikias has received numerous distinctions, including being named one of the metro area’s Top Doctors by Castle-Connoly every year since 2007. He was named to the list of  Top Doctors in Gastroenterology by New York  Magazine in 2014. His areas of expertise include advanced endoscopy, including ERCP and Endoscopic Ultrasound with Fine Needle Aspiration as well as the management of complex liver disease.

It is Dr. Nikias’ belief that an individual’s understanding of their illness is the first step in achieving wellness. He looks forward to educating his patients and helping them realize optimal digestive health.

Appointments can be made either online or by phone.
Phone: 2014897772
To make an appointment online, please fill out the form below.